WIFIE members have held a number of exhibitions over the years and continue to look at ways to be involved in various events and develop challenges for their own individual photographic practice. To see some of the exhibition highlights click on the images below.

International Women's Day 2019.
The theme for International Women's day was 'Balance for Better', which aimed to encourage a global drive for professional and social equality. Wifie members were able to consider this theme or one around body image for the exhibition at St Brides in Edinburgh. Have a look at the work created by clicking on image.

International Women's Day 2018. Press for Progress.
This year we decided to have an on-line exhibition so invited members to submit their images for the website rather than have an exhibition in a venue. There were fewer exhibitors but as always the work is diverse and exciting. Have a look by clicking on the image.

Window on our World. August 2017
An exhibition of photographs taken by Wifie members on display at the Image Collective Gallery at Ocean Terminal. This work offered members with a chance to explore and question what our thoughts and ideas associated with the environment and the world we live in.

The theme for International Women's Day in 2015 was 'Make it Happen' and Wifie members decided to use this as the basis for their own exhibition theme. Adjusting it slightly they invited members to explore their own ideas around, Her Voice: Make a difference, make it happen. 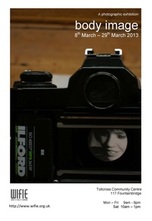 Body Image March 2013
Leading up to International Women's Day 2013 Wifie members shared ideas and worked on their own themes for an exhibition at Tollcross Community Centre. The work illustrated a wide range of ideas and included photographs that were printed using traditional silver halide processes in the darkroom to those created using digital media.

This exhibition, on the theme of 'Body Image' went on display later in the year at Gilmerton Community Centre as part of the Scottish Mental Health Arts & Film Festival throughout October 2013.

Themis: Blind Justice December 2011
The theme, 'Themis: Blind Justice' was chosen by Wifie members for an exhibition during the 16 Days Campaign, Against Violence Against Women in 2011. This is an annual event and it starts on the 25th November, International Day for the Elimination of Violence Against Women and ends on the 10th December, Human Rights Day.

Themis was a Titan Goddess of divine law and order in Greek mythology.

New Works March 2011
During late autumn 2010 Wifie members decided that it would be a good idea to exhibit their work for International Women's Day during March 2011. It was also agreed that this time we would have a completely 'open' brief offering members the opportunity to exhibit any work that they wanted and show off their talents in a range of photographic areas. The final result was and exciting display of images in a wide range of styles and content. The work went on display at Tollcross Community Centre where it went down very well..

The exhibition then went on display at Tollcross Community Centre and displayed a range of styles and ideas generated by the exhibitors.

Sense of Self March 2010
This exhibition went on display during International Women's Day 2010 at the Drill Hall. The theme, 'A Sense of Self' was chosen by Wifie members and funding from the 'Women's Fund' enabled members to participate in workshop at STILLS Gallery & Studios here in Edinburgh.

Wifie members then went on to create their own work incorporating a wide range of subject matter and ideas.

Hip & Zen: Fashion, Culture and Spirituality 2008
This exhibition was part of the 5th International Festival of Middle Eastern Spirituality and Peace. The theme was very broad and offered Wifie members a great opportunity to interpret it in whichever way the felt suited their interests and style of photography.

Leading up to the event Wifie members were able to participate in some workshops which included a trip to Inchcolm Abbey on a small Island in the Firth of Fourth and to Samye Ling Monastery in the Scottish Borders.
back to HOME page
Powered by