﻿﻿Exhibitors
Make a Difference, Make it Happen.
Belinda Burch
"Our silence is visible"
Women in Black Edinburgh hold a silent vigil outside East Register House on Princes Street every Saturday from 1pm to 2pm, and have done so every week for over thirteen years.
They are part of a network of women world-wide committed to peace with justice and opposed to war and other forms of violence. They wear black to mourn all victims of war, the destruction of people and of nature.

Women in Black began with weekly vigils by 15 Israeli women in 1988. They were joined by Palestinian women, and soon there were 40 Women in Black groups around Israel and the West Bank. The movement later broadened to other conflicts and countries.
In 2001, Women in Black was awarded the UNIFEM Millennium Peace Prize for Women and nominated for the Nobel Peace Prize.
There is more about Women in Black Edinburgh at the website www.wibs.org.uk also on their Facebook page www.facebook.com/womeninblackedinburgh 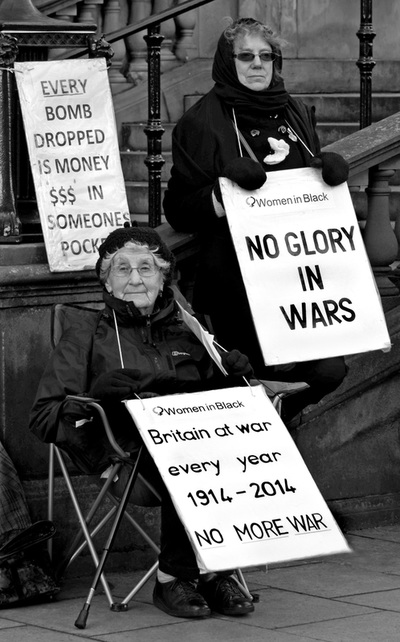 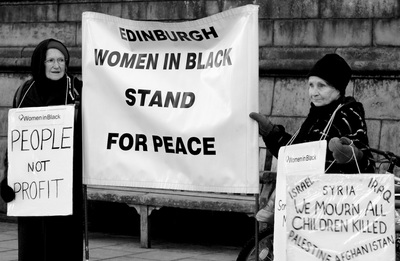 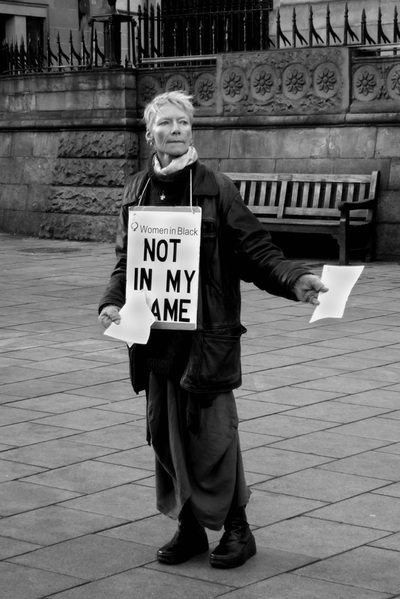 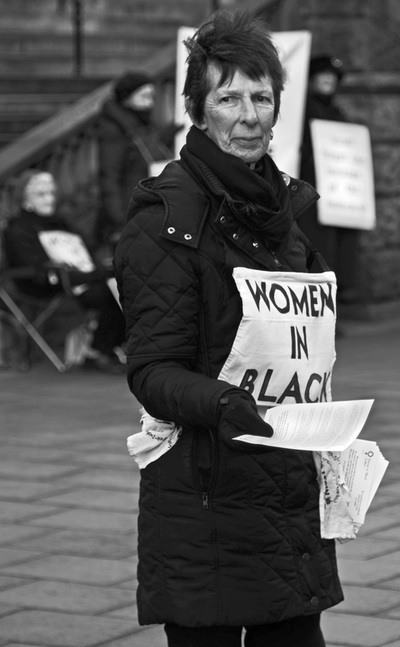 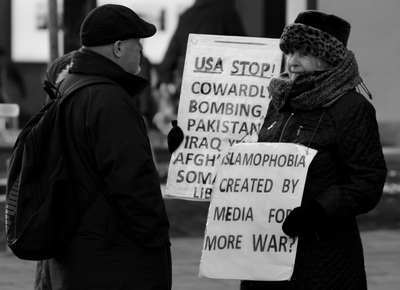 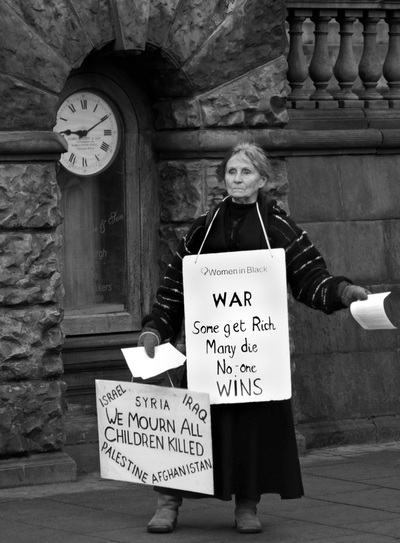 Damiana Magris.
Make it Happen: Would Independence Prevent Gender-Motivated Murder?
What follows was extrapolated from a paper prepared for the Expert Group Meeting on Geneder-Motivated Killing of Women organised by UN in 2011.
National statistics confirm that in all European countries, the majority of female homicides are gender-based murders (femicide). Mostly committed by partners or other relatives, Domestic Violence revolves around notions of unequal power relations and includes extreme jealousy, passiveness or passion, dowry disputes or issues of 'honour'. Customs and traditions that reinforce the notion that women are inferior to men needs to change so that we can end violence against women and eliminate all forms of discrimination. 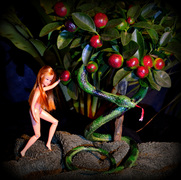 Fenella Stuart-Hamilton
Her Voice: Make it Happen
God said:
"You shall not eat of it, lest you die"
"You will not die"said the serpent
"God knows that the day you eat of the fruit your eyes shall be opened and you will be like gods, knowing good from evil."
Extracts from Genesis 2, Old Testament, The Children's Bible.

Eve submitted to temptation in eating from the tree of knowledge but her eyes were forever opened to experiences. How can one know good without encountering evil, know pleasure without feeling pain or warmth of love without coldness of hatred? Life is about taking risks, if you do not try something you will never know where it might have led you.
Molly MacCaul
They paved paradise and put up a parking lot.
The lyrics from Joni Mitchell's song 'Big Yellow Taxi' was my inspiration for this exhibition.
The current political and economic situation has seen the world's wealthiest get richer - Credit Suisse figures recently noted that 1% of the world population own half of the world's wealth - whilst the poor get brushed aside.
Our political figures continue to make decisions for economic growth based on maintaining the current situation with little regard for issues that we the people may fee are more important. For them, money talks! 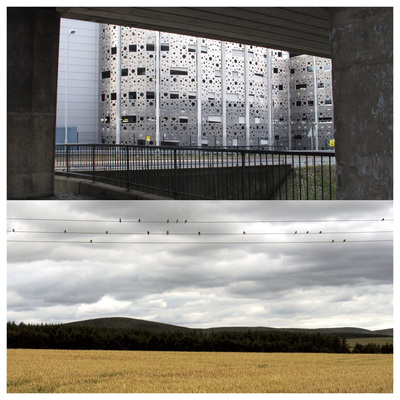 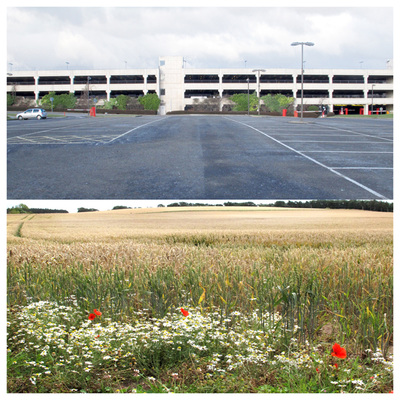 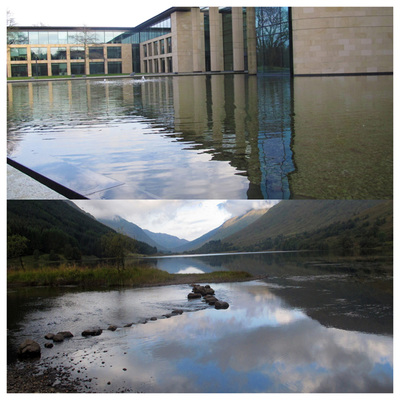 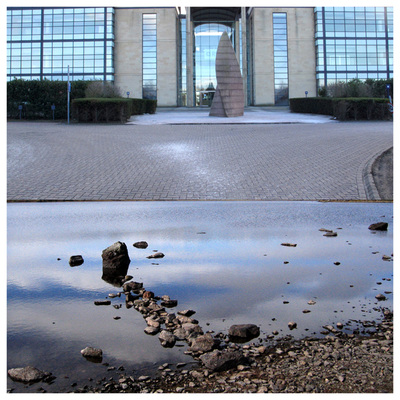 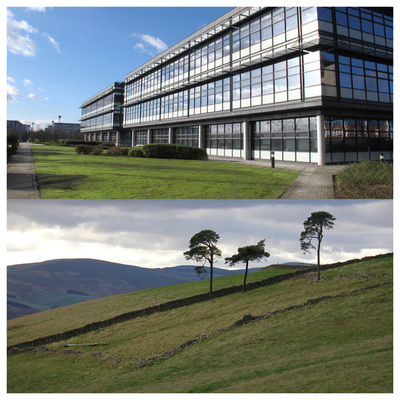 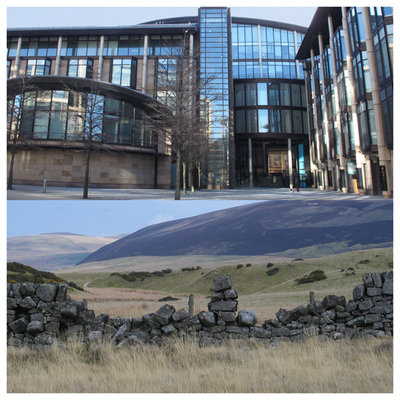 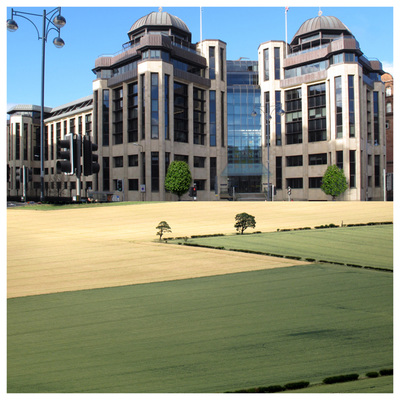 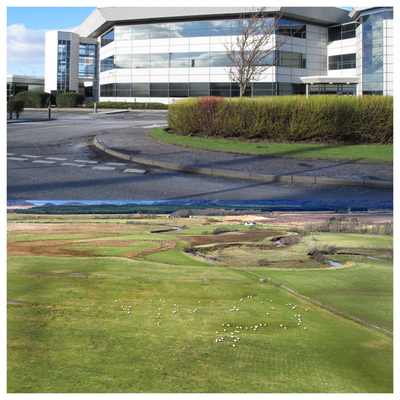 Caroline Armstrong
What a feminist Looks Like
Issues surrounding gender inequality affect the whole of society and this man shows you don't have to be a woman to support a fairer world.
This picture was taken in 2012 at the Slutwalk, a march against victim blaming.

No more Page Three
I took this photograph because it meant a lot to me that a man was making a bold statement against the objectification of women.
back to Exhibitions
Powered by